Non League Finals Day Promises To Be A Festival Of Football!

This Sunday’s double header at Wembley Stadium looks set to be a fantastic day of football, with tens of thousands of tickets sold. Will this be the first of a new tradition for the Vase and Trophy Finals, or is it a last desperate attempt to justify the finals taking place at the home of English football?

Ticket sales have been brisk, and there are only days left until this season’s Non League showpiece finale to the season at the National Stadium. For fans of Hereford FC, Morpeth Town, FC Halifax Town and Grimsby Town it is the culmination of a hard season, and all four will want the win for different reasons.

First up is the FA Vase final, which kicks off at 12:15, and sees Midland Football League champions Hereford FC host Morpeth Town of the Northern League. Hereford have sold more than nineteen thousand tickets so far, whilst Morpeth have sold in excess of four thousand.

Morpeth finished fourth in the EBAC Northern League, but were nineteen points behind champions Shildon. Interestingly, for a club finishing fourth with seventy seven points, goals were not the order of the day in Town’s matches. In their forty two league games, they scored forty six and conceded thirty nine. They will need that tight defence against Hereford, who plundered an incredible 138 goals as they amassed 108 points on their way to the title.

So how did the teams get to Wembley?

Morpeth started at the very beginning, in the First Qualifying Round way back on September 5th, when they beat Padiham 4-1. En route to the final, they have also beaten both North and South Shields (the latter in an epic penalty shootout which ended 10-9 after a 3-3 draw), and overcame Bowers & Pitsea 4-3 on aggregate in the semi-final.

Hereford, meanwhile, came in at the Second Qualifying Round, and beat the likes of Leicester Nirvana, aswell as Combined Counties League high flyers Hartley Wintney and Camberley Town on their journey to Sunday’s final. During their title romp, The Bulls notched an almighty twenty seven wins in a row in all competitions, before a 1-1 draw with runners-up Alvechurch ended that sequence.

Hereford have been granted permission to parade their mascot before the game; a real life Bull named Hawkesbury 1 Ronaldo, between 11:10 and 11:40.

Prediction: I have to be honest here, I just cannot see past Hereford for this one. The club are on the up again following their rebirth, and in Mills and Haysham they will surely have too much for the Morpeth defence. I’m going to say Hereford FC 3 Morpeth Town 1.

At 4:15, attention turns to this season’s final nonleague match of the season, the game that brings the curtain down on nearly ten months of drama. The FA Trophy final sees two teams who competed in this season’s National League, but who will be two divisions apart in 2016-17, compete for the most prestigious trophy in nonleague. While Grimsby Town enjoyed success in the promotion playoff final just last week, FC Halifax Town will be playing in National North following relegation.

The Mariners will be confident of completing a double this weekend, thus repeating the feat of York City in 2012. Their 3-1 victory over Forest Green Rovers last weekend was a confident display, and banished the ghosts of the past three seasons, in all of which they suffered playoff heartbreak, in either the semifinal or final.

Paul Hurst’s side boast some enviable attacking talent in Padraig Amond, Omar Bogle and Nathan Arnold. Amond was the joint top scorer in the National, bagging thirty goals, the same as Dan Holman at champions Cheltenham Town. Bogle made the step up last summer from Solihull Moors, and has performed well all season. He will now get the chance to play in League Two.

FC Halifax had a horrible season, in which they went through four managers on their way to relegation. The Shaymen won just one of their first thirteen matches in charge, prompting the club to sack Neil Aspin, the man who had led them to three promotions in four seasons. Under current manager Jim Harvey, the team did show fight and there was hope that they would pull off a miraculous escape. However, a final day draw with Macclesfield Town saw them drop into the bottom four. Striker Jordan Burrow has been a rare bright spot in the season, though, banging in fourteen goals.

One thing should be certain in this game: goals. The two league games between the teams yielded thirteen goals; Grimsby thrashing Halifax 7-0 at Blundell Park, while The Shaymen garnered some revenge in the return fixture, triumphing 4-2.

FC Halifax made it to the National Stadium by beating Tamworth, Barrow AFC, Chester FC, Gateshead, and Nantwich. The quarter final victory against Gateshead will have been especially sweet, not only as it came on the back of a penalty shootout after a 3-3 draw in the away replay, but because the Gateshead manager was a certain Mr Aspin.

Grimsby got to Wembley by beating Solihull Moors in a replay (with Bogle scoring against his old club), Weston-Super-Mare, Havant & Waterlooville, Woking and Bognor Regis Town.

Prediction: No doubt Grimsby will be clear favourites for this one, but Halifax will be hoping that their opponents may have taken their eye off the ball having achieved the major objective of promotion last weekend. However, a Wembley cup final should be enough to focus the players of both teams. I can’t help thinking that Grimsby’s attacking prowess will be too much for Halifax, and it will end up 4-2 to Grimsby.

The team from the Non-League Podcast – Kristan, Libby, Rob and myself – will be in attendance on Sunday, hopefully recording some audio from in and around the ground. Dave won’t be at the games, but he is hoping to meet up afterwards for a chat. Make sure you subscribe in iTunes by searching ‘Non League Podcast’, or you can find the show online.

We will be sitting in the Halifax section, in Block 552, so make sure you find us and say hi!

This is the view we can look forward to enjoying from our seat (courtesy of wembleystadium.com) 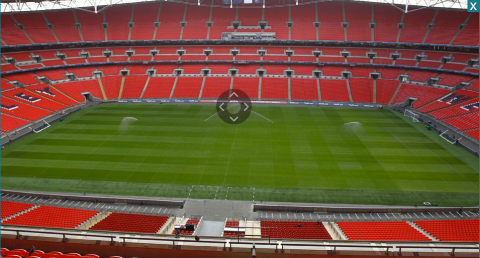 Hey, I'm James and I'm relatively new to non-league football, having only taken in my first match in September 2011. Despite it being a 0-4 defeat for Hampton & Richmond Borough, I became a huge fan of the club and NL in general. So much so that they are now the first club that I mention when talking about which team I support! I just got massively disillusioned with top flight football in this country and the attitudes of the lawmakers and top clubs in general, and I wanted to start taking my son to see decent football. I am now the club's Deputy Press Officer, and loving every minute!
View all posts by James Bartaby »